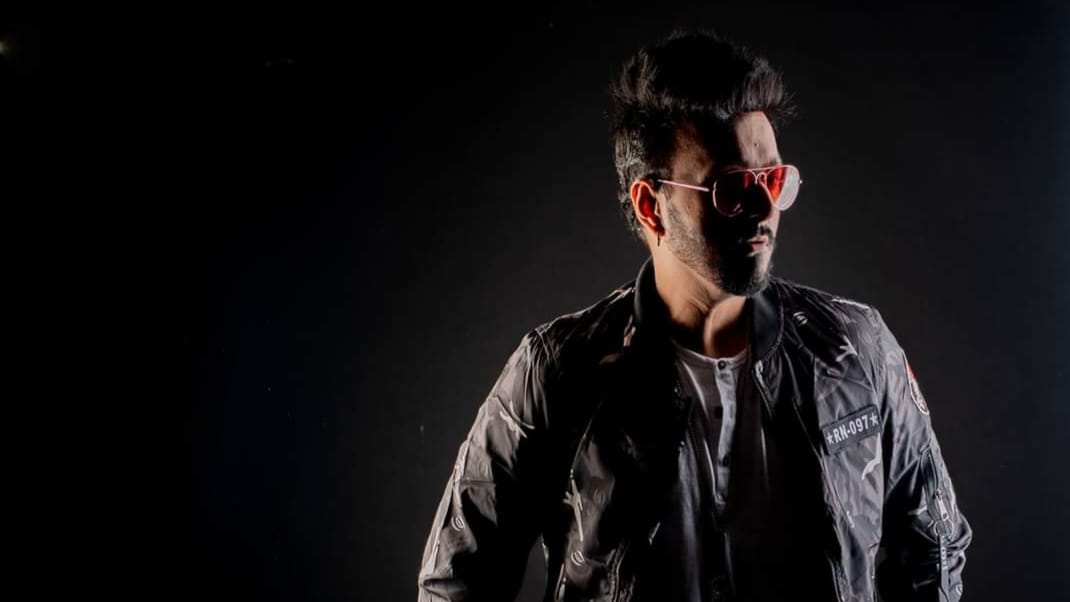 RITZZZE – who has been a Dj and Music Producer for almost 17 years. He says that music happened at a very old age (his idea of old is 15 years).

He narrates his story, “So I basically started at the age of 15 to be a Dj cause of vanity issues. I was an overweight, chubby fat kid weighing 100 kgs plus with self-esteem of minus. We used to have prom nights or school socials where boys and girls used to ask each other to dance. I was never a ladies’ man and was a little shy. So I decided to become the DJ at these parties. So I used two Walkmans and CDs. Then I used to basically fade in and fade out between songs. I had no sense of mixing and beat-matching. I called myself an overweight jukebox back then. Then school got over, and I randomly asked senior DJs for a break. There was one man in particular who liked my voice on the MIC. His name was Dj Ravi, and he was one of the most popular DJs at that time. He asked me to become his assistant and also his hype man. So, I used to play during the hours when no one was at the club or maybe for like 5 – 10 mins in the end. I wasn’t getting paid, but I was getting something that money could never buy. I was getting knowledge and experience.

I was learning how to do business in this creative field. I urge all upcoming DJs to notice and keep themselves aware. Never lose an opportunity to learn. Honestly speaking, I come from a highly privileged space, and monetary wise I was never motivated. My family has a name, and there is an influence, but I’ve never used my surname or my family connections to get as far as I have. I worked my way up. I networked with the right people. I just looked at myself as a product and sold myself. I was constantly upgrading and making sure I was updated. I study music as a subject. I went away to Delhi in 2013 just to learn MUSIC and THEORY. No shortcuts and no handouts.

Yes, people helped me along the way because I always had something to bring to the table. Always make sure you have a value, not monetary but in terms of skills. It was sheer hard work, persistence, and consistency in my case. All I did was that I took a sound and made a style out of it. I rebranded it and simply marketed it. There is a similar style, but it never had a name or a face. But there is a name to it and also a face. What you hear always exists, but now you just have to sell it. It’s like how you have a product in a shop. Advertise, market, and build its value. Anything and everything you do has to conclude with something that will help you achieve your target.”

So is STREETSTYLE going global?

“I wish I had more support like how they have it in Europe and the USA. The DJs have proper support and unity. Unfortunately, in India, there is this drama and facade I see. It’s pretty much a rat race. This is why I’ve never ever been fond of paid award shows. I rather enjoy my rewards. There is a lot of respect for the senior DJs, but I sense insecurity in a few, but you can’t blame them. Technology is changing rapidly, and so are the tastes. The only survival technique is to keep evolving and working. That’s how I’ve survived for 17 years. Plus, I’ve received too much of love from the general public and as well as from the DJs. The DJs play my remixes, and they’re the ones who have made me popular, and that’s what matters. StreetStyle is a global sound, and don’t be surprised if I announce a tour. It won’t be like I’m going for a holiday, and I randomly approach clubs for shows, but it’s going to be a full-throttled well-managed tour. My music is organic. The love I get is organic too. The senior DJs and fellow DJs love me, and that’s 1000% organic. The views, likes, and everything that comes with my music is purely organic. So answering the questions asked. HELL YEAH .. we going GLOBAL BABY.”

“I want to take this platform to give a shout out to DJ AKHTAR, DJ NOTORIOUS, HARISH LAKHMANI, and DJ RICHARD for constantly playing my music, for teaching me, for giving me love, for always pushing me, and just being the most amazing people that they really are. I think the industry needs more people like them. “