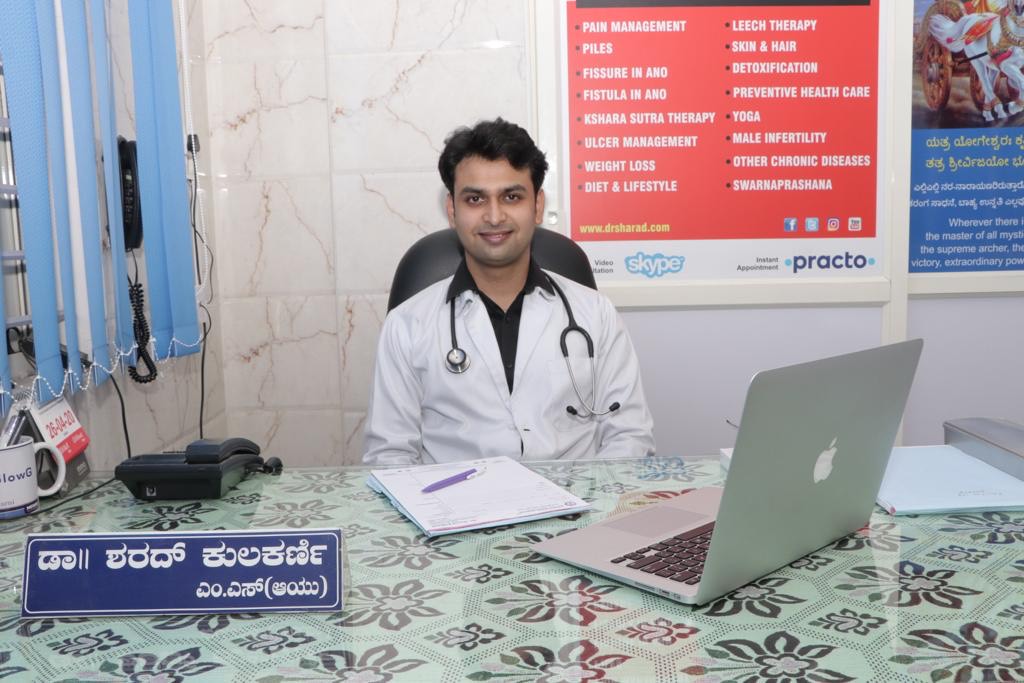 The profession of a doctor comes with a boatload of responsibilities. Besides, there is no one attribute that makes an excellent doctor.

And Dr. Sharad Kulkarni is known to be a maestro in the directory of Ayurveda Doctors. Besides, he is a Best-Selling Author, Blogger, Vlogger, and Speaker, who has presented on several national and international platforms.

A sneak-peek at Dr. Sharad Kulkarni’s journey so far

Around two decades back, when Modern Medicine was taking the world by storm, Dr. Sharad decided to make his mark in the world’s ancient healing science; Ayurveda.

Also known as the ‘Science of Life’ and ‘Mother of All Healing,’ Ayurveda originated in India over 5,000 years ago.

Since childhood, Dr. Sharad had a slight inclination to learn the nuts and bolts of this ancient science. Apart from his academics, he would sink his teeth into reading books on Ayurveda-Yoga. He was hellbent on turning his passion into a profession. So, post-schooling and pre-university, he joined SDM Ayurveda College and Hospital, Udupi, to seek his graduation. However, this was just the beginning of Dr. Sharad’s journey.

Later, he enrolled in the Government Ayurveda Medical College, Bengaluru, aiming for a post-graduation degree in Ayurvedic Surgery (Shalya Tantra). After completing his M.S., he enrolled to pursue a Ph.D. in Shalya Tantra. During this tenure, he has been involved in many innovations, fueling his earnest desire to take Ayurveda to the next level.

Unstoppable, he continued to ascend the several rungs of the ladder and founded Jeevottama Health and Wellness Clinic in Bengaluru. This is where he earned the title of being an acclaimed doctor in the field of Ayurveda. With over a decade of experience, he has treated more than 5,000 patients so far.

Here are some (of the numerous) accomplishments he has added to his hall of fame.

However, despite his jumbo folder of accomplishments, Dr. Sharad remains humble and committed to his work.

When asked, he quoted, “In spite of being a dynamic and proven science for centuries, Ayurveda still remains inglorious because of lack of awareness. People seek to obtain quick relief, not knowing that the illness might backtrack if the root cause is not uprooted. Ayurveda is based on natural elements and is completely organic. I feel privileged to have been endowed with such trophies. But this is not my ultimate goal. I will call myself an achiever when I succeed in influencing millions of people globally to opt for Ayurveda as a healing methodology. Not only this, we all must adopt this Indian science as our ‘way of life’. This will be a golden feather in my hat, in our hat!”

He adds, ‘Evidence-based medicine is the need of the hour.’

Why is Dr. Sharad Kulkarni one of the most sought-after doctors?

Here are some key traits that make him an exceptional doctor:

Compassionate: “Even a thick folder of degrees might fail to make an impact if you are not compassionate to your work.” – Dr. Sharad Kulkarni.

He is someone who is invariably keen to care for his patients day in, day out. With a strong work ethic, he is always open to stretching his ideas for the welfare of his patients.

Proficient Communicator: A good doctor is skilled in communicating with the patients, their families, staff members, and other medical professionals. Being an active listener and asking open-ended questions empowers Dr. Sharad to nose out the trigger of the problem and offer a tailored treatment. In a nutshell, he is well-versed in how to extract and impart information authentically.

A Team Player: “If you are the best in your team, probably your team is not the best.”

He is always enthused to collaborate well with his team and help them hone their skills. He encourages creativity among his staff members and associates, which can further ease the process.

Avid Learner: According to Dr. Sharad, learning is a lifetime affair. Therefore, despite his busy schedule, he makes out time to keep adding to his treasure trove of knowledge. He keeps himself abreast of the techniques to add more magnitude to his treatment.

A Man on a Mission

Dr. Sharad is on a mission to inspire 1 million people globally to live life the Ayurveda way by 2030. This is a proven gateway to living a healthful and long life. You can join hands with him by making this Vedic science an intrinsic part of your life.