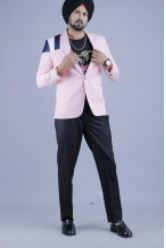 Deep Dosanjh is a Punjabi Hip Hop Artist, Lyricist, and Composer. He was born on 05 May 1990 in a Sikh family and his birthplace is Sangrur, Punjab, India. His height is about 6’2″. He has completed his study at Punjabi University Patiala. His real name is Sandeep Singh. Currently, He is living in Sangrur, Punjab. In 2019, He came out with his first song “Kabba Subaah” which made him famous in the Punjabi industry this song video was released by the famous Record label “Geet Mp3” that goes a super hit. In 2020, He came out with his song “Warning 26” on farmer protest from famous singer “Sidhu Moosewala’s ” label “5911 Records”. this song goes in #8 Number trending in India.
after that, he comes up with many songs like Darr, Fire Honge, and Doesn’t judge. He also launched his music label named “Deep Dosanjh Music”. He gave a super hit song “Haye Tatta” to the industry and recently released a song named “Shada Union”, and the song is appreciated by millions of fans all around the world. Even his song is most popular on Instagram reels. The number of fan following and the popularity of songs is increasing day by day. He has won millions of hearts with his songs and there is one thing that makes his songs more energetic and pumped up the voice he has and the power of the lyrics in the songs. The best thing about Deep Dosanjh is that with time the quality of the songs is improving and the fan following is simultaneously increasing. Nowadays he is working with Money on the beat, Pav Deep, and these peoples are a very important part of the Punjabi music industry. His future plans are very crystal clear about his future and he knows how to introduce the best songs in the industry. The latest song is “18 saal” released and we wish Deep Dosanjh very good luck and lots of love.