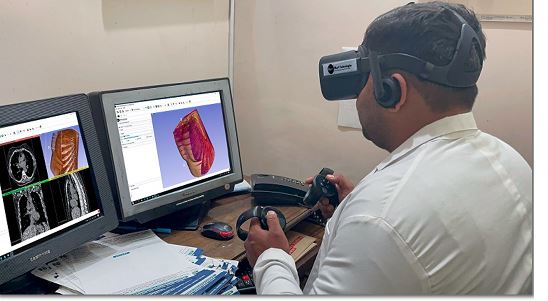 The IT company that started back in the year 2017, Blue 9 Technologies, still stands true to revolutionizing IT services. A young and visionary Saubhagya Tripathi founded this company at the tender age of 19. The current CEO is Mayank Chaudhary. The company has been bestowed with various awards and achievements. It has also been awarded as the ‘Company of the Year’ by Silicon. The people at Blue9 Technologies are always up to something new and creative at their offices in Gurugram.

They have done some incredible work in the past, including working with NVIDIA Clara in recent times to produce better medical imaging using MONIA. They are presently working on a mind-bending piece of work. This will revolutionize not only the IT world but also the medical sector. They present to you the BlueScan. Bluescan by blue nine technologies is an extraordinary solution of IT Tech for an everyday problem we are coming to face.

Almost all of us would have had to go through at least one CT/MRI scan. This new product of theirs is going to change that forever. We cannot beat it down to just a “product,” It is the solution. It is, in fact, the future of scanning in the medical field!

The existing method of the conventional process for reviewing the MRI’s volumetric scans is for the doctors having to spend time building a 3D model of the scan, slice by slice themselves in their head, and then form a diagnosis. This is a lot of precious time we can never get back.

Just to be able to save a tonne of time within the average 95% of the radiologists would be multiplying the speed of the process to finding an illness and curing almost ten times faster. BlueScan is brought with such advanced technology that you can bid farewell to hours reading scan images. It basically transforms MRI/CT scans (or datasets) with an AR/VR environment. It revolutionizes the game because it provides depth perception and real-time rotation to be able to view the scan to the operator’s comfort.

At Blue 9, they strive to be client-focused, have exemplary leadership, high aspirations, and hope to achieve promising results. They don’t just strive. They do! Breast cancer is one of the leading concerns in women’s death, and that is because 85% of the time, more often than not, calcifications might start to appear. Calcification, in simple terms, is when calcium builds up in body tissue and forms into a hard cluster. Yes! You guessed it right. That CAN’T be good. This is why the faster it can be detected and diagnosed, the better. However, standard mammography isn’t the most efficient way since these calcifications appear in a linear and branching pattern. With the help of BlueScan, a 3D model of the same scans can be viewed and rotated, thus quickly detecting such a thing in a linear and branching fashion.

This is possible due to BlueScan’s smart Depth Three Dimensional technology (D3D). When a radiologist puts the HDU on the BlueScan, he processes the images, segments them in three dimensions, and chimes in the 3D filtering algorithm. Then finally, it renders the image, and a true 3D image is produced using Augmented Reality/Virtual Reality. All of these processes in a matter of no time can help save someone’s life! They stand by their slogan: Better Informed Doctors are Better Doctors.

There are already similar technologies in use, like the ChimeraX, but it is only limited to one diagnosis function. With BlueScan, the possibilities are endless. Not only can you use it for diagnosis but also pre-operative planning, educational purposes, and intra-operative assistance. This is a huge leap in the healthcare industry, and Saubhagya and his team are sure to come with many more technological advancements.

To check out their work, head over to: http://www.blue9tech.com